Members of Bird and Wildlife Team are acclaimed Sri Lankan birders, wildlife researchers and wildlife photographers, and authors on their subjects. The combination of their knowledge and field skills is the key to the high success of our tours.

Our team members have been leading very successful tours for up to 30 years and thereby have first-hand experience on where, when and how to find birds, mammals and other wildlife in the country, and also in India and the Andaman Islands. This long-term experience has provided the team with unmatched know-how on carefully tailoring any type of nature observation tour to meet your needs. We provide very personalized services to achieve the goal of every tour and to make it a highly successful one for you. This is proven in testimonials and tour reports of our tours. Deepal Warakagoda
Deepal Warakagoda is one of Sri Lanka’s most experienced birders, and has been birding since childhood. His knowledge and experience of bird sounds led him to discover the Serendib Scops Owl in 2001 in the rainforests of Sri Lanka. It is a bird species new to science, discovered after 132 years in the country.

He co-authored the latest field guide on Sri Lankan birds Helm Field Guides. Birds of Sri Lanka (2012). He is the Sri Lankan collaborator in Birds of South Asia: The Ripley Guide, and author and co-author of numerous articles, and two standard, widely-used books, on birds of Sri Lanka. Deepal started recording bird sounds in the late 1980s and soon developed an enormous passion and knowledge for wildlife sounds, has lead him to publish many sound guides on Sri Lankan birds locally and internationally as well. He is a member of several local and regional nature societies and clubs such as Ceylon Bird Club and Oriental Bird Club. He is also a member of the Rarities and Records Committee of the Ceylon Bird Club. He plays a major part in important matters concerning conservation of birds and their habitats in Sri Lanka.

Deepal began his career as a bird tour leader in 1990, since then he has accompanied a number of worlds renowned birders, Ben King, Tom Gullik and late Phoebe Snetsinger are few of them. He is a co-founder of Bird and Wildlife Team. He is a visiting lecturer on Sri Lankan fauna in National Tourist Guide and Chauffeur Guide Training Courses conducted by Sri Lanka Institute of Tourism & Hotel Management and Sri Lanka Tourist Board. Uditha Hettige
Uditha Hettige, could be considered as the most experienced tour leader in overall natural history. He began his birding as a child and progressed studying other faunal groups eventually to lead natural history tours, since 1998. His deep interest in the more obscure mammalian species such as bats, mice and others as well as amphibian, reptile has put him on a continuous journey in search for them. His travels and tour leading in the last decade in India and the Andamans has enriched his interest to a scale where it’s inevitable but continue to do so.

His credentials as a wildlife photographer in Sri Lanka have enabled him to publish his material in many Journals, magazines and books locally and internationally as well. He persistent battles to save the countries natural habitats, has led him to author numerous articles, papers and conduct numerous lectures throughout the country. He is a member of the Rarities and Records Committee of the Ceylon Bird Club apart from being in many other societies and clubs as well.

Apart from being one of Sri Lanka’s leading ornithological tour leaders he is the most sort after mammal tour leader by world’s renowned mammal listers. He is a co-founder of Bird and Wildlife Team. He constantly conducts lectures where ever necessary in order to make an impact on conservation issues. His skills also as a wildlife sound recordist has led him to co-author CD-ROM guides on ‘sounds and images of birds of Sri Lanka’ together with Deepal Warakagoda. Uditha is a visiting lecturer on Sri Lankan fauna in National Tourist Guide and Chauffeur Guide Training Courses conducted by Sri Lanka Institute of Tourism & Hotel Management and Sri Lanka Tourist Board. As a member of the Primate Conservation Society of Sri Lanka and Vice President and founder member of the Herpetological Foundation of Sri Lanka (HFS), he has been the principal and co-investigator of the many research projects. His excellent knowledge and skills in finding rare species has been instrumental in finding several newly described snakes and frogs in Sri Lanka. He played a pivotal role in the bird flock study in the Sinharaja Rain Forest. He constantly is involved in educational programs highlighting the importance of the countries biodiversity and conservation, especially the wet zone forests of Sri Lanka.

Dulan is a keen wildlife photographer and his work has been published in reputed journals, magazines and books. He is a member of the Ceylon Bird Club and many societies and clubs too. Dulan’s knowledge and skills in leading birding as well as special mammal watching tours with a very high success rate have been highly appreciated by his past clients. Senehas Karunarathne
Senehas has been a birder since his childhood and been actively involved in bird conservation and studies since his enrolment as a member of the Young Zoologists Association in 1997. He is a member of the Ceylon Bird Club and has been an active member and recorded many rare species and as an avid Photographer documented many of them too.

His unparalleled knowledge on bird vocalisation has taken him to a different level in birding. Apart from hid birding knowledge his knowledge on reptile’s freshwater fish has put him in a pedestal as one of the top tour leaders. He is also the web administrator for Birds Taprobanica and Yala National Park facebook groups. He is presently involved in many conservation projects as well as photographing wildlife throughout Sri Lanka. 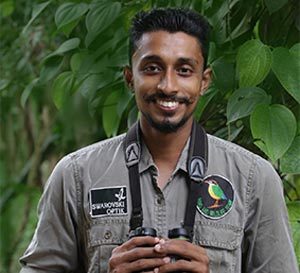 He started birding on joining the Young Zoologists Association (YZA) in 2008, and has been an instructor in its bird study group since 2013 to date. Dilkusha progressed to studying other faunal groups, eventually leading natural history tours. Apart from his knowledge of birds and mammals he has an expert knowledge on reptiles and freshwater fish. He also has a sound knowledge on butterflies, amphibians and marine fish. He holds a PADI open-water diving licence.

Dilkusha was elected president of the YZA in 2019. He has worked in several important surveys and research projects, such as Biodiversity in Horton Plains National Park, Biodiversity in Galwila Eco Park, and has been a member of the research team on Diyasuru Wetland Park, and the study of distribution of mammals in Sri Lanka.

Diluksha’s knowledge and skills in leading birding as well as special mammal watching tours with a high success rate have been highly appreciated by his clients. 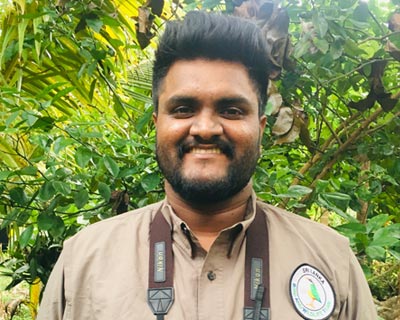 Gayan Cooray
Gayan Cooray is an overall naturalist and a researcher in the natural sciences.

He began studying fauna on joining the Young Zoologists’ Association (YZA) in 2013, and progressed to study birds, mammals, butterflies, dragonflies and amphibians. As the Vice President of the Environment Action Committee he was actively involved in several animal rescue projects and in environment conservation. In 2017 he was acting president of the YZA.

He worked in several important survey and research projects such as the baseline survey of the Kala Oya Basin, a biodiversity survey of Gal-vila National Park, a survey of the flora and fauna diversity of the Peak Wilderness National Park and a study of the distribution of Odonata (dragonflies and damselflies) of Sri Lanka.

Gayan is studying for a Bachelor’s degree in the natural sciences at the Open University of Sri Lanka.

He has been leading natural history tours since 2017. tha Antony
Palitha has been a prolific birder and a naturalist since leaving boarding school in 1984. He is a member of the Oriental Bird Club as well as a member of the Ceylon Bird Club. His main interest does not confine him only to birding but to all aspects of nature, thus an overall naturalist.

His interest has taken him on photo adventures in to Africa, India, and Singapore as well. Janith Jayarathna
Janith Jayarathna, is a fanatical birder and overall naturalist from childhood. Since 2007 he has been a member of Young Zoologist association. His involvement in voluntary work at the National Zoological Gardens has augmented his knowledge in other faunal groups as well. Janith has completed the Wildlife Management Course held by the Open University of Colombo and is hoping to continue his studies further.

He has worked in several monumental surveys and research projects, such as – Biodiversity in Horton Plains National Park, Bird diversity in Bodinagala Forest Reserve and distribution of mammals in Knuckles Forest Reserve.

His current work involves the documentation of marine mammal diversity and behavioural patterns on the north-eastern coast of Sri Lanka.